8 VOLCANIC EXPERIENCES TO HAVE IN ICELAND

Iceland is perhaps best known for its “Land of Fire and Ice” nickname, earned from its long history of eruptions at volcanoes with tongue-twisting names. Eyjafjallajökull, anyone?

But keep in mind that like the northern lights, volcanic activity doesn’t happen on demand. And if an eruption does occur, you don’t really want to get too close to the action for obvious reasons.

There are plenty of sites to safely visit on your trip to Iceland, the aftermath of recent or ancient volcanic eruptions in various places around the country.

Let’s take a look at 8 unique volcanic attractions to check out in Iceland.

1. New: The eruption at Fagradalsfjall

You could see recent molten lava in Iceland on the Reykjanes peninsula.

On 19 March 2021, there was a minor volcanic eruption at Mount Fagradalsfjall in the Geldingadalur valley. A fissure appeared, of around 200 metres (656 feet), spouting hot lava and creating one of Iceland’s newest volcanoes.

But don’t worry about air traffic and the like. This eruption wasn’t as significant as Eyjafjallajökull in 2010 due to the nature of this specific volcano. The lava is slowly snaking its way down a closed valley rather than ejecting a column of ashes into the sky.

Because it is located close to Reykjavík and Keflavík International Airport, it means you may be able to visit the volcano on a short break or on a road trip.

You could drive or take the bus to the area – which would take around 1 hour from Reykjavík – before hiking up to reach the volcano (3-4 hours return). Or take a helicopter tour over the volcano for a thrilling experience!

2. The Volcano House in Reykjavík

Before venturing into the Icelandic countryside to see actual volcanic sites, why not take some time to learn about volcanoes in the capital city?

Located right by the old harbour in the Reykjavík city centre, the small Volcano House museum features exhibitions on Iceland’s geological history as well as a collection of volcanic rocks (that you can touch!).

It also screens two documentaries about famous eruptions. The first one is about the sudden eruption in the Westman Islands (which you can read about below). The other covers the famous 2010 volcanic eruptions at Eyjafjallajökull and Fimmvörðulháls.

3. The Eldheimar Volcano Museum in Heimaey

Vestmannaeyjar, or the Westman Islands, is a stunning archipelago off Iceland’s south coast. Sometimes called “Pompeii of the North,” all of the archipelago’s islands have evolved from underwater eruptions. 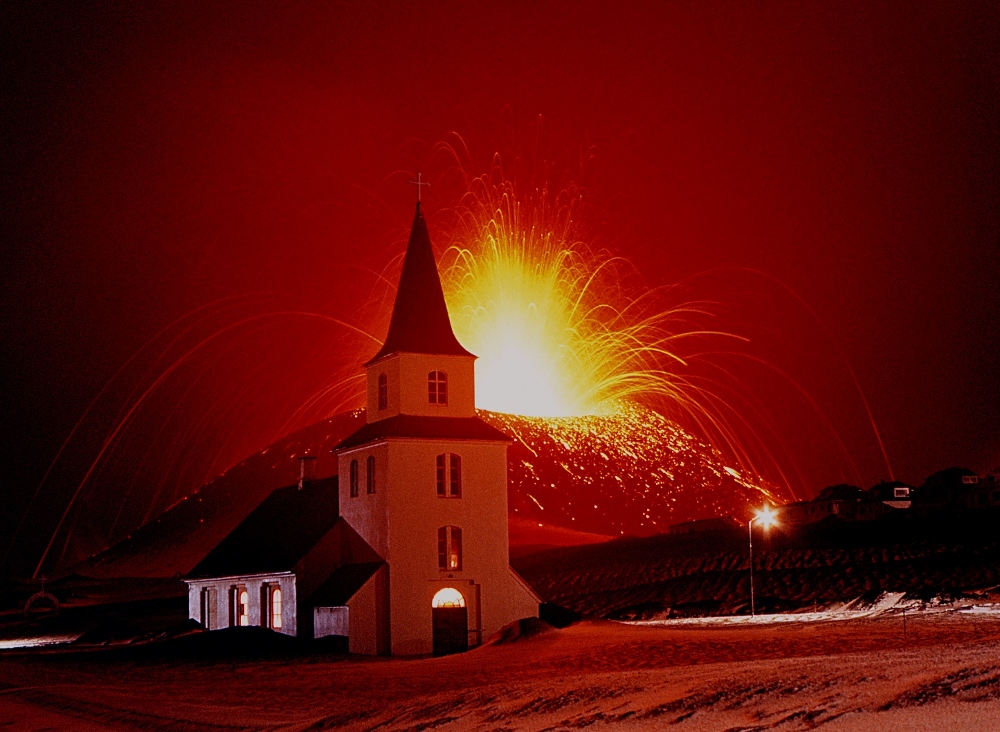 Heimaey, the only inhabited island, was the site of an eruption in 1973. It buried 400 buildings under thick lava, some of which have been partially uncovered and preserved.

The Eldheimar Volcano Museum in town focuses on this event, which is today considered one of Iceland’s largest natural disasters. The exhibit looks at the lives of the residents before the eruption that saw them evacuating their homes in the night and never being able to return.

4. The Lava Centre in Hvolsvöllur

If you came to Iceland to experience the Land of Fire and Ice, the Lava Centre museum in South Iceland is worth a visit. This innovative museum opened in 2017 not far from Mount Hekla, an active volcano that was considered to be the gateway to hell in the Middle Ages.

If all that tectonic rumbling makes your stomach rumble, you can grab a bite at the onsite Katla Restaurant, aptly named for one of Iceland’s largest volcanoes.

Located at the tip of the Snæfellsnes peninsula in West Iceland, the terrain of Snæfellsjökull National Park looks as though it was ripped from prehistoric times.

The park is named for the prominent, glacier-topped Snæfellsjökull volcano, which Jules Verne famously used as the setting for his classic novel Journey to the Center of the Earth.

This park boasts many other unusual volcanic landforms to explore, such as Djúpalónssandur beach with its smooth black pebbles and “lifting stones”, and the beautifully secluded Dritvík cove. You could also discover the jutting cliffs at Lóndrangar and the extensive lava fields surrounding the volcano.

For a closer look at the area’s volcanic history, you can even join a guided tour of the Vatnshellir or Víðgelmir cave.

6. “Inside the Volcano” tour near Reykjavík

Not only can you walk into a glacier in the Land of Fire and Ice, but you can also go deep inside a dormant volcano.

The Inside the Volcano day tour is a real-life journey to the centre of the earth. You descend 120 metres (394 feet) via a cable lift into the ancient magma chamber of the Thrihnukagigur volcano. From the bottom of the cave, you’ll be able to marvel at the colourful lava-rock walls. 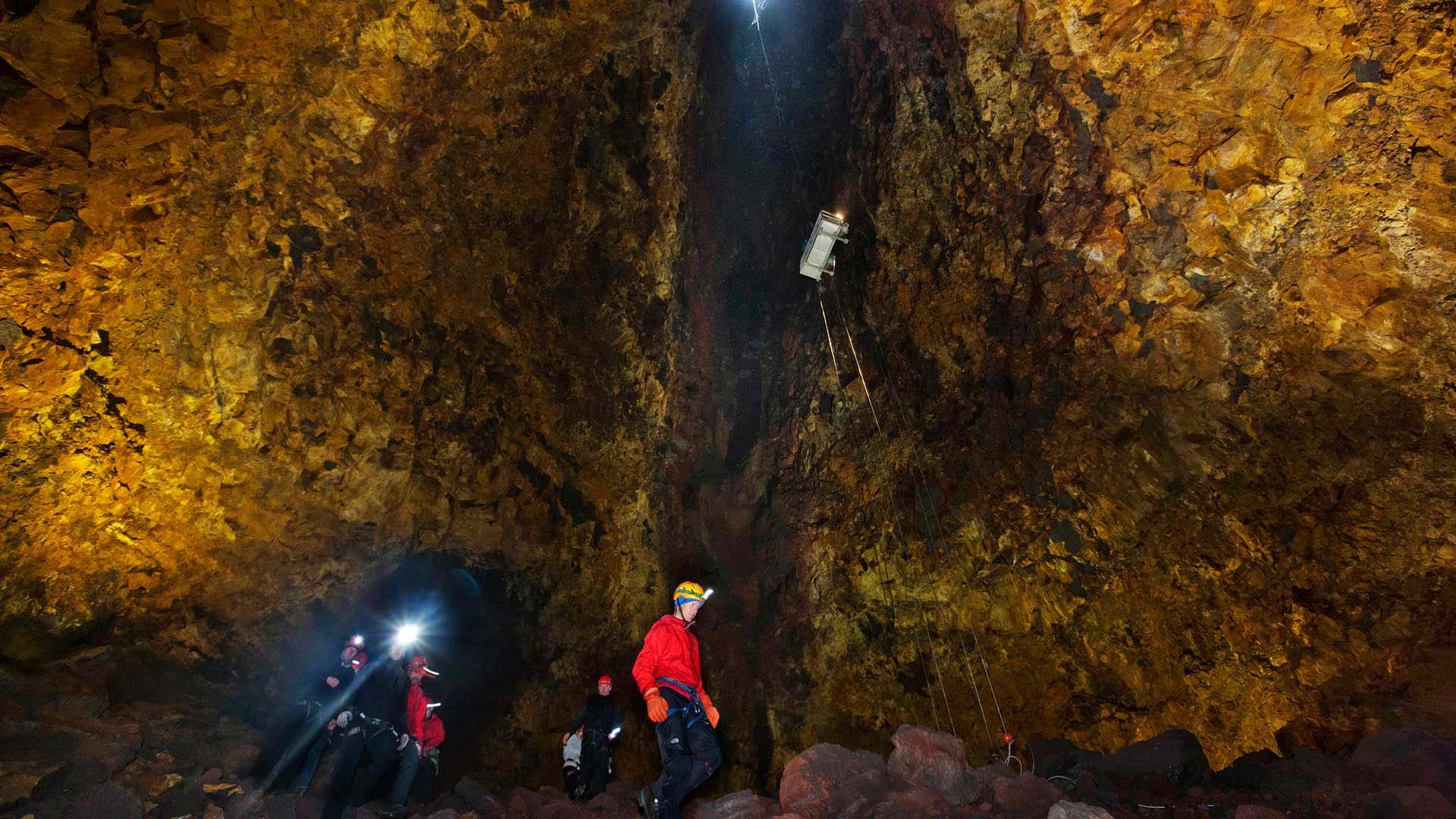 Inside the Volcano © 3H Travel

For a similarly adventurous experience not far from this volcano, we recommend a guided “Lava Tunnel” tour inside the Raufarhólshellir lava cave.

The Lake Mývatn area of North Iceland is a hotbed of unusual volcanic terrain and geothermal activity.

At 1 kilometre (0.6 miles) in diameter, Hverfjall is probably the biggest tephra crater in Europe, making it well worth a visit. Located nearby the popular Dimmuborgir lava formations, this enormous crater was formed in an explosive eruption some 2,500 years ago.

Another major Lake Mývatn area volcanic attraction is Krafla, a massive caldera with a diameter of 10 kilometres (6.2 miles) and depth of 2 kilometres (1.2 miles).

Situated along a 90-kilometre (56-mile) long fissure zone, it erupted a staggering nine times between 1974 and 1984, with 29 total eruptions in recorded history. Among these events is the “Krafla Fires,” a long-lasting eruption from 1977 to 1984.

On the northwest side of the Krafla caldera is Víti, an explosion crater 300 metres (984 feet) in diameter with a greenish-blue lake inside of it. The name Víti, meaning “Hell” in Icelandic, comes from the old local belief that the underworld was located under the volcanoes in this area.

From the Krafla parking area you can walk to the edge of the rim on a marked path, guiding you through sulphur vents and rocks that are still warm to the touch from the Krafla Fires.

It is possible to embark on guided day hikes at eruption sites, though this requires good hiking experience and an excellent fitness level. If you’re up to the challenge, ask your Nordic Visitor travel consultant about special volcano tours.

Note: Never attempt to hike in the highlands or on glaciers without a professional, licensed guiding service.

Good to know: If by chance there is a volcanic eruption in Iceland, Nordic Visitor makes sure clients are informed about any potentional disruptions to travel plans and takes care of any itinerary rearrangments.

Authorities in Iceland have officially declared the country’s longest volcanic eruption in 50 years over. The spectacle drew hundreds of thousands of tourists to witness its lava flows. “It’s been three months since...

What You Should Know About Iceland’s Volcanoes and Waterfalls

If you’re interested in visiting Iceland, chances are it’s because you want to see the beautiful natural features of this tiny Nordic island. Situated on a rift between the North American and European tectonic plates...

As to why the UTAV Service can be Not Reacting

How to get the Best Antivirus security software Review

As to why the UTAV Service can be Not Reacting

How to get the Best Antivirus security software Review

Don't be shy, get in touch. We love meeting interesting people and making new friends.

Iceland’s Volcanic Eruption Has Become a Reason to Party

Right now in Iceland: Hot lava and a warm welcome

What You Should Know About Iceland’s Volcanoes and Waterfalls